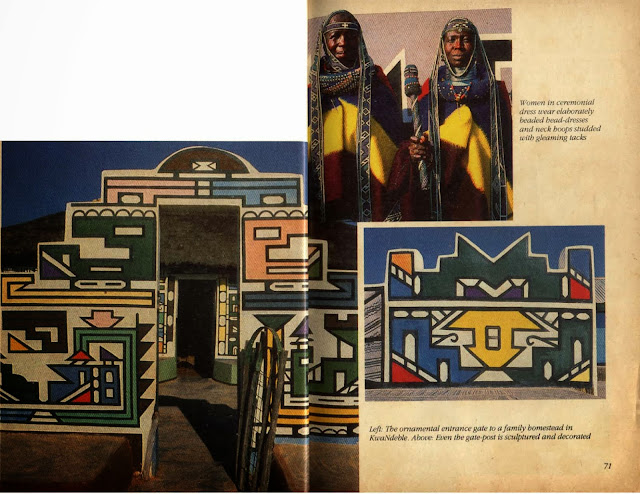 The Ndebele woman does not paint for acclaim or money. She paints because her house is her shrine, and she desires to beautify it. What set a woman apart from the others is her style of decoration and her choice of colours for the walls of her mud dwelling. But when asked about their art, these women merely say, “I learnt from my mother” or “It is the law of the Ndebele.” For generations the women of the Nedebele of Southern Africa have produced an art of remarkable richness and vitality. 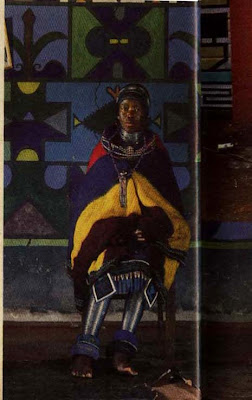 When the current generation of painters was young, its palette was limited to earth tonnes – browns, Ochres, red and black. But today commerical tints allow the women to create all the hues of the spectrum. Brilliant colour, enhanced by the Transvaal light, is as much a part of Ndebele decoration as composition, texture or any other factor. Ndebele painting is composed freehand, directly on to the wall surface, in one of two prinicipal styles; traditional and contemporary – with both sometimes present within the same dwelling. In the traditional style, the designs are bold, linear and abstract, becoming more complicated on the front of the house. The contemporary style is more representational, symbolizing courtyards, doors and windows and striking diagonal, horizontal and vertical lines echo the forms of support structures beneath the mud walls. The Ndebele artists choose the most graphic and geometric shapes from everyday life to use in their compositions. Flowers and trees, which can be broken down into well-defined components, are common motifs. Ans as western aspirations replace African culture, the women have begun to include light bulbs, street lights and television aerials perched on thatched roofs in their murals. 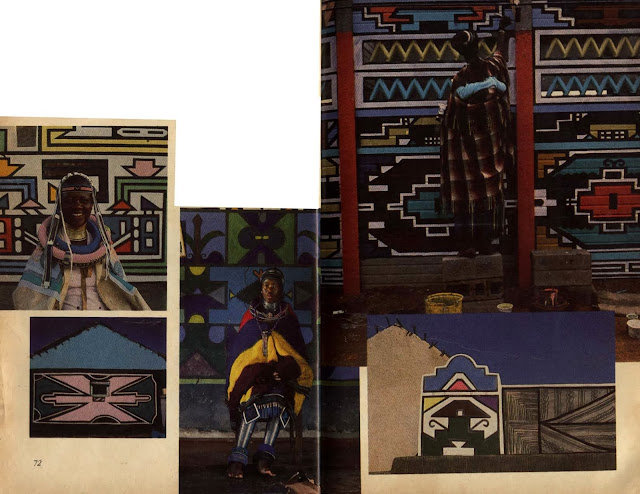 The Ndebele women take as much pride in their bead work as they do in their mural painting. After completing daily tasks around the compound, they gather under the shade of a tree to sort, string and stitch colorful glass or plastic beads for personal adornment. In ceremonial dress women wear gala blankets with beaded trimmings, long beaded strips attached to headbands, lavishly beaded skirts, along with beaded hoops studded with glittering tacks. The Southern Transvaal Ndebele today 400,000 strong have survived as a nation because so many have adhered to their culture. Despite terrible social, political and economical upheaval, these women have stubbornly pursued their own distinct aesthetic path. 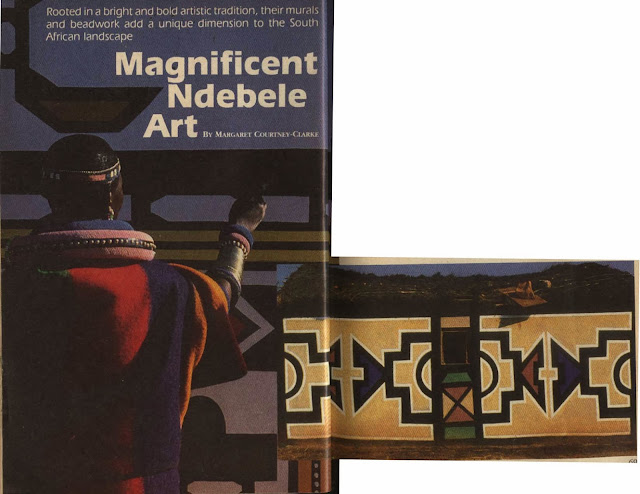